The first year Georgia mandated a driver’s license was 1937 but a driving exam was not required.  1937 is the same year Charles Hopkins created this I.D. card for himself.

The advent of the automobile in the first decade of the 20th Century created a lot of problems especially with accidents.  60% of motorized vehicle fatalities involved children in the street.  There were no traffic laws and cars were the newcomers onto the street full of animal powered vehicles.  ‘Serious debate was held in courtrooms and in editorials over whether the automobile was inherently evil. The state of Georgia’s Court of Appeals wrote: “Automobiles are to be classed with ferocious animals and … the law relating to the duty of owners of such animals is to be applied … . However, they are not to be classed with bad dogs, vicious bulls, evil disposed mules, and the like.”‘ from an article in the Detroit News.

Farmer, Electrician, Railroad Inspector, Attendant at VA Hospital, Retail Sales, Barber, Dress Maker, Homemaker, are representative of occupations that were prevalent in the years around the great depression of 1929 in Georgia.  Our Kindred Ancestors made a living in all of the above professions.

James Elmer HOPKINS b 1886 d 1950 lived in Atlanta GA area. He was reported to be a farm laborer when he was just 13 years old and he eventually settled into the occupation of a barber for at least 10 years.

Myrtle Faye DENTON HOPKINS b 1890 d 1985 was a homemaker and raised 5 children.  Originally from TN and settled in Atlanta with her husband James Elmer.

William Washington BARKER b 1898 d 1977 was an electrician after he came back from World War I.  At age 32 he worked for the railroad as a car inspector and  finally ended his career as an attendant at the Veteran’s Administration Hospital. Lived in Augusta GA.

Essie Lee INGLETT BARKER b 1893 d 1980 worked in the 5 & 10 (nickel & dime variety) store and as a sales woman at a florist before she married William Washington in Augusta.  She was a homemaker throughout her married life and raised their daughter.

Max Augustus LINN b 1896 d 1952 was also reported on the census records to be a farm laborer when he was a young lad of 13.  He like, James Elmer HOPKINS, also eventually became a barber in Atlanta. Keeping a trim look must have been quite popular in those days.

Eula Mae HOLDER LINN b 1900 d 1993 was a young wife to Max Augustus and homemaker raising her children in Atlanta.  By the 1940 census, she was working as a dressmaker.  She was quite an active seamstress on the side and did a lot of sewing for her sister.

John Wesley DEAN b 1885 d 1965 was a farmer throughout his entire life in rural south Georgia in a place called Waycross (the railroads converged in this town and “crossed”), near the Willacoochee River and the Withlacoochee River in Atkinson County.

Bessie BURKHALTER DEAN b 1896 d 1971 married John Wesley as a young woman like Eula Mae HOLDER, and was a homemaker raising 9 children on the farm.  Hard working gal. 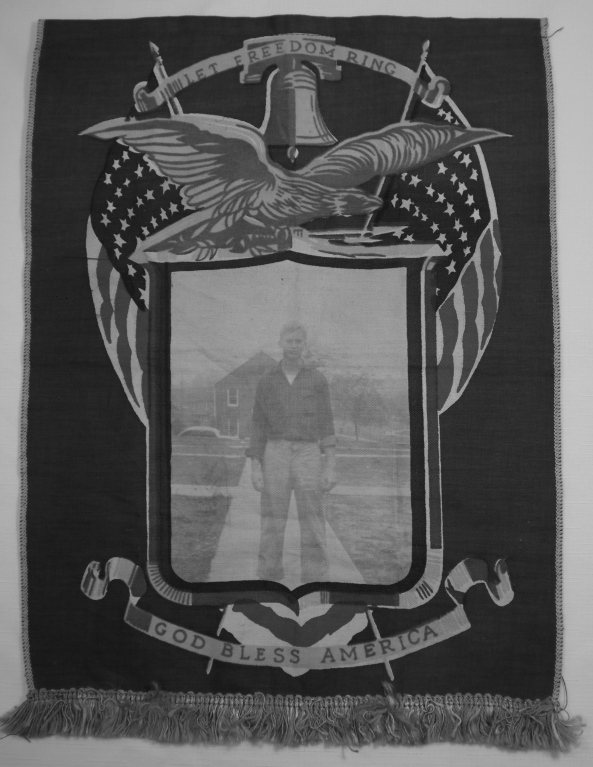 This memento fabric banner features Charles Eugene HOPKINS.  The banner itself is about 12.5 x 17 inches and looks like a silk screen type design on cotton twill fabric with a photo image in sepia tone.

The background of the banner is a wine/red hue with red, white, and blue flags.  The eagle, bell, wording, fringe and thread are gold toned.

The photo image seems to be clearer in  black and white rather than color.

The surroundings, time and circumstance of this unique memento are a mystery.

It was great.  I had a large craft paper envelope with “Charles HOPKINS Personal History” written on it.  I knew I’d been collecting bits and pieces but my early onset dimensia (actually, I believe I developed it in the womb) had me wondering, “What’s in this?”.  It was almost like Christmas, hey wait, it IS the season!

Below is a short slide show of some of Charles E. HOPKINS Navy memorabilia:

Charles HOPKINS in center of photo with other uniformed men.

On the last post I asked about the navy service record of Charles HOPKINS.  A reader named Ollie promptly replied that I could search for it at:    http://www.archives.gov/veterans/

If any one beats me to it, please let me know what you find.

Also I’m looking for photos of:

You can take a picture of any pictures/items you have with your smart phone, I-pad (tablet) or camera.  Please send it along.  There is interest in sharing these visual notes of history, not to mention the important role of teaching through image.

I do love this picture of Charles Eugene HOPKINS walking down the street in his U.S. Navy attire.  What street is it?  I don’t know, perhaps someone can piece together some clues.  What age?  Well, it was before I was born. Does anyone have his navy service record?   Ginger 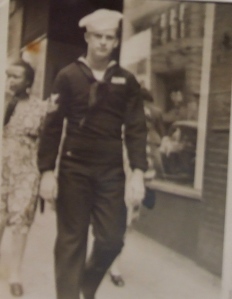 This picture was found on find-a-grave.com  (awesome site).  I shared it via e-mail a week or so ago but wanted to include it in the site. It’s such a lovely portrait of the family. It was taken about 1896.

From Left to Right: