Could these stories be true?  If they are, they explain a lot of figures of speech that we commonly hear.

Available at EBay Peacock tin bath (galvanised?) £75.00 0 bids This would make a lovely planter for the garden. It would probably benefit from a coat of paint. There is a dent on one side as seen in photo four. Collection only due to the size weight.

END_OF_DOCUMENT_TOKEN_TO_BE_REPLACED

This record was recently discovered amongst the family piles.  It was written by H.S. Brach.  The ending note to this document  says, “This was taken from INGLETT’s war record by H.S. Brach, By., GA”  Andrew INGLETT was born in 1836.

[Taken from a copy of an old typed document with hand written notes by Evelyn Dean where the copy was cut off.  Transcribed with last names capitalized, states abbreviated and paragraph breaks added.]

“Andrew Edwin INGLETT was born at Bel Air, GA, on the 25th of February, 1836, and is the son of Andrew and Mary INGLETT.  His mother’s name was Mary Smith.  On the 10th day of November he married his cousin Mary Ann INGLETT.  Unto them six children were born:  Sidney, Aida, Kate, Andrew, Fannie, and Dessie INGLETT.  He enlisted in the Confederate Army at Bel Air in May, 1861, in Company C. under Captain W.P. CRAWFORD of Columbia County, First Lieutenant Henry P. TUTT of Augusta (killed at Malvern Hill), George A. HILL of Grovetown, Second Lieutenant, Ed. PERRIN of Augusta, Third Lieutenant.

This Company was in the Twenty-eighth Regiment, commanded by Colonel GRAYBILL of Sandersville, GA.   The company went to camp of instruction at Griffin, GA, remained there about five months and was then sent to Manassas, VA, when the brigade became a part of the Provo Guard for Johnson’s army.  He was then sent to Yorktown until May the 4th when Johnson’s army fell back to Williamsburg under fire, and fell back to Seven Pines on the last day of May, 1862.  They fought the battle of Seven Pines and lost five men killed on the field of action, namely:  Sgt. Jackson HITT, whose home was on Wrightsboro Road six miles from Augusta;  privates William FINCH, William SCHAVER and Robert TINLEY from Bel Air;  and Gabriel HENDERSON from Pine Tucky, Richmond County.  Fought the battle of Mechanicsville on the night of June, which battle began on the night of the 25th.  Went into the battle of Gaines Hill on the 27th day of June.  Private McCONNOR was killed and Ed. BUCKLED was killed at Cold Harbor on July 1st.

INGLETT’s company was engaged at Malvern Hill where Tom MARTIN was killed.  INGLETT was wounded in this engagement and came home on a forty days leave.  At the expiration of the leave he rejoined his command at Leesburg, VA.  The command left Leesburg, crossed the Potomac at Charles City, VA, passed through Frederick City and Hagerstown, Maryland, and went back to South Mountain, a distance of about twelve miles under a forced march.

On the night of September 13th four companies of the Twenty-eighth, Georgia, including Company C, were put in the mountain gap behind a stone fence and fought all that night.  A shell coming through the fence killed Chester and Luther Blitchengton from Bel Air, GA, and tore open INGLETT’s shoulder.  INGLETT was carried to Shepherdtown where he remained for three weeks, rejoining his command at Guinea Station.  Spent the winter there and in the spring made a forced march through the Valley of Virginia, up by New Market and Staunton, VA and joined Jackson at Raccoon Ford, where the command captured a lot of Yankees and a baggage train.

There was hot fighting in the wilderness the next day lasting for five days.  Next engaged in battle at Chancellorsville where Stonewall JACKSON was killed.  INGLETT saw JACKSON and his staff pass on the evening of that day.  JACKSON was killed the next day.  The company was surprised to learn that STUART was in command and did not know of JACKSON’s death until several days afterwards.

From Chancellorsville the brigade was sent to Charleston.  It was then divided into INGLETT’s command under Major ELLIOT from North Carolina going to Fort Sumpter, a detachment of about twenty men remaining at Fort Sumpter for six months.  Under the command of Brigadier General Alfred COLQUITT, after governor of Georgia, the brigade was sent to Florida in time to join General FINEGAN in the fight at Ocean Pond or Olustee on the 20th day of February, 1864.  The Federal troops were under the command of General SEYMOUR.  INGLETT’s brigade engaged the 11th New Jersey, the 47th New York, the 6th and 57th Mass.  There were also 3 regiments of colored troops, composed mostly of refugee slaves from North Carolina.

The Confederates under the command of Generals FINEGAN and COLQUITT won a brilliant victory in this battle.  COLQUITTs brigade consisted of the 6th, 19th, 23rd, 7th and the 28th Georgia regiments.  INGLETT’s company went into battle with 28 men, of whom six were killed.  Those killed on the field were a father and two sons;  Richard CLIATT, helm CLIATT, and Bille CLIATT from Bel Air, Georgia;  Dennis INGLETT from Pine Tucky, near Bizelia, G., and Henry GOLLIFRIEND from near Bizellia.

The fight at Ocean Pond commenced at one o’clock in the day and lasted until 9 at night.  When the Federals retreated from Ocean Pond INGLETT’s command was sent to Baldwin, Florida.  They camped for about 2 weeks there.  From Baldwin they marched over the ridge of the Cherokee swamp through Camden, Wayne, Ware, and Pierce counties in Georgia and struck the Gulf Railroad at Blackshear, Georgia.  Boarded train at Blackshear en route to Virginia.  Laid over at Florence, South Carolina and other points a week or two, finally arriving at Petersburgh, VA. There they found that the Federals had about 28 batteries, including Fort Harrison.  The Federals had captured these batteries and some forts, including Fort Harrison.  Governor WISE had ordered out the militia and recaptured about 20 batteries.  INGLETT’s command at once became engaged and was successful in re-establishing the old lines from Petersburgh to Dreway’s Bluff.  The 6th day of May found INGLETT’s regiment at Chester, near Bermuda, between Richmond and Petersburgh.  The federal and confederate trenches were not over three or four hundred yards apart and not a yankee was to be seen nor a sound heard.  The confederates became suspicious.

Orders were given for six men from each of the ten companies in INGLETT’s regiment, making a total of sixty, to go over to the federal trenches to reconnoiter.  They found the federals in full line of battle.  Of the sixty men, twenty-one were killed or died from their wounds.  Among those shot down was Robert ANTRY from Richmond County near Bel Air.  He was lying about one hundred yards from the confederate breast works.  He called to INGLETT to come and get him.  At INGLETT’s request the captain ordered the command to cease firing and in the face of federal fire INGLETT went over the breast works and brought ANTREY back in his arms.  He was commended for his bravery and coolness under fire and was made a litter bearer, that service requiring men of his proven courage. 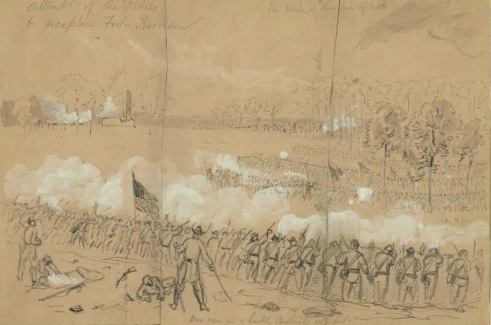 His command was next engaged in the second battle of Cold Harbor, North Carolina on the 25th day of June 1864, one of the hardest fights participated in, and under fire all the time.  General Rance WRIGHT’s Division was supporting INGLETT’s division.  D. H. HILLS from Bel Air called for volunteers to go to WRIGHT’s command for a box of ammunition.  INGLETT offered for this service;  sent about three hundred yards up a steep hill, the federals shooting at him all the way;  got a box of Enfield rifle cartridges weighing one hundred pounds;  was subjected to heavy fire on the way there and back;  was wounded three times in left arm and across the hip.  He reached his command in bad need of attention and was sent to the field hospital.  He then went back to his company.  On the 18th day of August the federals captured a part of Wildon railroad but were driven back.  In this fight INGLETT from near Bercillia and Dave VINSON from Sandtown in Richmond County were wounded.  On the 19th day of August, 1864 the confederates cut a large body of federals off from their main forces and Coquitt’s Brigade captured a large number of prisoners.  INGLETT was wounded in the right leg, fell in a heavy downpour of rain and was taken prisoner.  He was sent to City Point, the ball was taken out of his leg at Yake Field Hospital and he was put in prison where he remained from the 21st day of August to the following March 28th.  He was then carried with ten thousand other prisoners to Fort Pulaski at Savannah, GA, where they were exchanged.  INGLETT’s company also suffered the following additional casualties while in camp at Petersburgh:  A shell killed Nathan NEWMAN and John BUGG from Grovetown, Bill PATTON, color bearer from Richmond county. Tom PERRIN from Martinez was killed in skirmish fighting around Petersburg.  Dave VINSON was killed at Fort Fisher, Wilmington, NC which was the last fight in which INGLETT’s company was engaged.  Those were trying times.  INGLETT always tried to keep up his own and the spirits of the men around him.

Just the other day in the evening of life this old Johnny Reb told me of the many parts he played back in the sixties among the followers of Marse ROBERT when the thin gray line stretched at Petersburg until it just had to break.

STRENGTH IN FAMILY We are unique individuals full of passion, integrity, and vision who support each other with love. We value the development of our gifts, mind, and spirit while providing tools for growth and creativity. We work and delight in making plans for long-lasting, strong experiences wherever we may be and courageously fulfill those plans. We believe this life is a gift and trust we will continue the adventure after death.
Loading Comments...
Comment
×