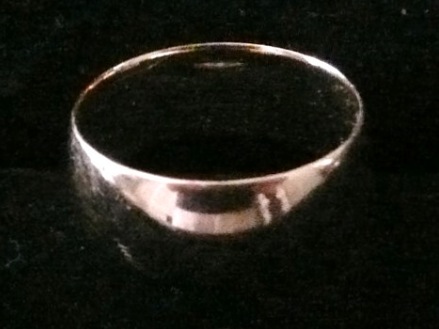 The ring has power.  The power to bring history to life.  Imagine yourself as Celia LANGSTON ready to marry Samuel STYLES just a few years after America declared it’s independence.  What would you wear to your wedding?  Who would be there?  What celebratory events would follow?  These are unknowns.  But the existence of a gold ring with Celia’s name engraved on the inside testifies that she was real.  Even though the ring has seen a lot of change in events and hands, the small circle of gold has not changed. It was hers . . . Celia’s.    We can imagine Celia wearing it as her skirt hem brushed the plank floor of her home;  as she cooked cornpone and pine bark stew on her fire stove;  and as  she nurtured and raised her eleven babies.

The history of the ring was shared by Charlotte Johnson on Ancestry.com in 2011.  She writes, “Wide gold wedding band confirmed by jeweler to be from the early 1800’s or before. Ceilia Langston would have be married to Samuel Stiles in South Carolina in the early 1790’s. Their daughter Holly Berry was born in 1795.”

STRENGTH IN FAMILY We are unique individuals full of passion, integrity, and vision who support each other with love. We value the development of our gifts, mind, and spirit while providing tools for growth and creativity. We work and delight in making plans for long-lasting, strong experiences wherever we may be and courageously fulfill those plans. We believe this life is a gift and trust we will continue the adventure after death.
%d bloggers like this: