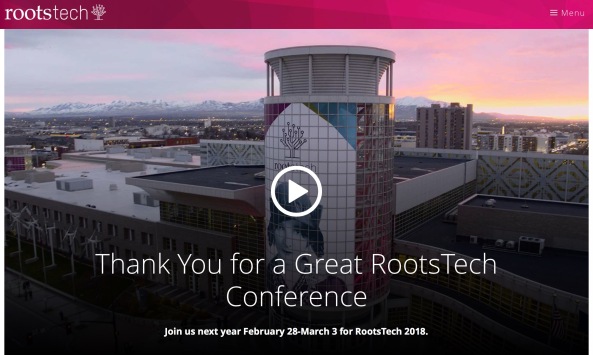 RootsTech Conference for 2017 occurred this past February in Salt Lake City UT.  Still the biggest gathering for those interested in family history work and research.  You can view the presentations by visiting rootstech.org

Here is a sampling of some of the sessions: END_OF_DOCUMENT_TOKEN_TO_BE_REPLACED

Can DNA differ from one sibling to another?  The experts say “YES”.  From an article posted by Anna Swayne on March 5, 2014 on Ancestry.com titled, “Understanding Patterns of Inheritance: Where Did My DNA Come From? (And Why It Matters.)” we read:

Your DNA contains a record of your ancestors, but you aren’t a carbon copy of any one of them. The particular mix of DNA you inherit is unique to you. You receive 50% of your DNA from each of your parents, who received 50% of theirs from each of their parents, and so on. In the chart below [you will need to click on the link to the article to see the chart] you can see how the amount of DNA you receive from a particular ancestor decreases over generations. If you go back far enough, there is a chance that you inherited no DNA from a particular ancestor.

END_OF_DOCUMENT_TOKEN_TO_BE_REPLACED

It would be really cool to have a crystal ball to tell us what we don’t know about our heritage.  DNA testing is probably as close as we’ll come.

What can you learn by sending spit and money to a laboratory?  The first thing is finding out where your ancestors originated from, about 500 years ago before the age of travel.  The second is to find clues to certain health predispositions that are happily waiting for an opportunity to show themselves in your body.  There is more to learn from DNA testing but it may take a degree in DNAology to understand it.

The science of knowing about ourselves through genetic composition continues to develop.

Recently two kindred family members sent DNA to be tested by the company ’23And Me’.

If you descend from Charles Eugene HOPKINS you will share a bit of what a  grandchild learned from the testing.

Basically, you are 99% European.  Within that percentage, you are about 28% British & Irish, 1.2% French & German, about 60% Northern European, and about 9.8% Nonspecific European.

The remaining 1% that is not European interestingly enough has .4% West Africa, .1% Oceanian (Australia area), and .4% unassigned.  There was no American Indian found in this DNA.

If you descend from Evelyn Roberta Barker DEAN and Brad DEAN:

For flowers that bloom about our feet; for tender grass, so fresh, so sweet, for song of bird, and hum of bee; For all Things fair we hear or see, Father in heaven, we thank Thee!

For blue of stream and blue of sky; for pleasant shade of branches high;  For fragrant air and cooling breeze;  For beauty of the blooming trees, Father in heaven, we thank Thee!

After watching ‘Finding Your Roots’ (a genealogy program on PBS) that highlighted Harry Connick Junior and Branford Marsalis we learned about genetic testing.  It inspired a  member of our Kindred Tree family to submit a DNA sample to 23andMe, a genetic testing company (yes, the same company that’s been on the national news this week).  It takes about 6-8 weeks to get the results and it will reveal percentages of ethnic backgrounds.

A HAPPY THANKSGIVING to all.