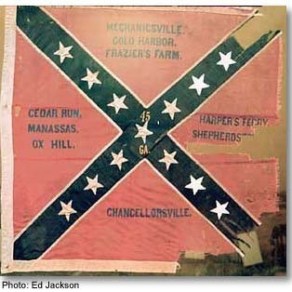 In the first two letters we find James reporting on his health and the status of the trees in Virginia.  He is concerned about affairs at home and probably in need of clothing for himself.  It seems as though he is anxious to receive a letter from his wife.  He is almost despondent sounding, reminding his wife to make arrangements should he die.

By the third letter he has heard from his wife.  Her letter took about 13 days to get to him. Again, he reports on his health and farming conditions but has probably seen something of battle and is looking for a little comfort or relief from his anxious circumstances.  Letters 3 and 4 are written in two consecutive days.  Again, the numbers in brackets are notes and are not in the original letters.

[1] 45th Georgia Regiment a volunteer infantry division of the Confederate Army. Organized by Colonel T. Hardeman Jr. during the winter of 1861 – 1862.  Also referred to as ‘McCowan Guards’.

[2] Forsyth is the county seat of Monroe County, GA where the DICKERSONs lived.

[1] A ‘gill’ also spelled ‘jill’ is a measurement of liquid volume.  In the United States it’s about 1/2 cup or 4 ounces.  The measurement is believed to have originated in the 14th century and stems from English King Charles attempting to tax whiskey and wine by volume in 1625. By law, Charles was unable to tax on a ‘Jack’ or ‘Jackpot’ so he taxed on the ‘gill’ which was half the volume.  The nursery rhyme “Jack and Jill” is thought to be based on this experience.

[2]  Alcohol use and abuse in military culture has a historical past.  Some reasons for its popularity include: a de-stressor during active war time, a peer bonding experience and a time filler.  Read more about this topic from a news article.

[3] ‘Yank’ is a shortened form of ‘Yankee’ which was (and occasionally still is) a term used to identify a person of  the Northern States of America.

[4] A ‘picket’ was a group of about 40 men from the infantry that served as a guard or outpost in advance of and for the rest of their regiment.  The duty was rotated amongst the men and was considered the most dangerous work in the infantry.  They were the first to see the frontline and could be wounded, killed or captured.  In this case 3/4 of the picket was captured.

STRENGTH IN FAMILY We are unique individuals full of passion, integrity, and vision who support each other with love. We value the development of our gifts, mind, and spirit while providing tools for growth and creativity. We work and delight in making plans for long-lasting, strong experiences wherever we may be and courageously fulfill those plans. We believe this life is a gift and trust we will continue the adventure after death.
%d bloggers like this: